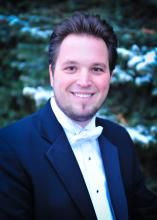 John Hermanson has been the Director of Orchestras at Fort Collins High School for 10 years and is in his 17th year of teaching. His program consists of four orchestras auditioned by level and Pit Orchestra. In addition, he teaches AP Music Theory, and Unified Music.

Mr. Hermanson’s ensembles consistently receive superior ratings at state festivals and have a long history of invitations to perform at state festivals, national festivals, and abroad. In March of 2020, the FCHS Symphony Orchestra was one of 7 orchestras in the country invited to perform at the Music for All Festival in Indianapolis, IN. In March of 2018 the FCHS Music Department toured Australia with 215 people, performing in Sydney and Brisbane. In January of 2016 and 2018 the FCHS Symphony Orchestra and Tower Orchestra performed at the Colorado Music Educator’s Association Convention. In March of 2015 the FCHS Music Department toured Europe, performing in Salzburg, Vienna, and Prague. Many students audition and are accepted to Colorado All State Orchestra and the Western States Honor Orchestra Festival on an annual basis. Creating the best possible orchestra experience for students is his highest priority.

Originally from Rapid City, SD, Mr. Hermanson moved to Colorado in 2001. He holds a Bachelor of Music Education, a Bachelor of Music Performance, a Master of Conducting, and a Master of Education degree, all from Colorado State University. Mr. Hermanson is immediate past chair of Colorado All State Orchestra and Chair of the Colorado ASTA Large Group Orchestra Festival. He has served on the CMEA Instrumental Music Council and many other committees concerning music education. Prior to FCHS, Mr. Hermanson taught at Summit High School and Conifer High School. He resides in Fort Collins with his wife, Anna.

PSD does not unlawfully discriminate on the basis of race, color, creed, religion, national origin, ancestry, sex, sexual orientation, gender identity, gender expression, marital status, veteran status, age or disability in access or admission to, or treatment or employment in, its programs or activities. A lack of English speaking skills will not be a barrier to admission or participation.
Nondiscrimination/Equal Opportunity District Policy AC >> Title IX compliance Officers >>