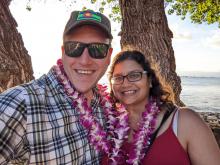 I am an educator with a varied background having taught IB German, AP Lit & Comp, AP Calculus, and Concurrent Math (intro to stats -> Pre-calc). Of all the things out there, I cherish learning new things the most and I adore losing myself in research at least once a month. I am a gamer, a reader, a runner, a statistician, and a nerd of the highest caliber. I love the analysis of music alongside comic books and traditional books and enjoy listening to YouTubers like Robert Jefferson (Comics Explained, Geek Culture Explained), Wisecrack (a video essay channel that discusses philosophy and other topics in modern media), the Theory Channels (Mat Pat fans unite!), and a plethora of other things. I used to consider myself a bit of a cinephile and look forward to spending at least one day a week at the movies as life slowly returns to normal.

You can usually find me in L-104, so feel free to stop on by and say hey. I'll be the guy with coffee mug.

One last thing, I am an avid Team Liquid fan and have been cheering them on since the original grudge match occurred between TSM and TL. While I don't play League of Legends anymore (time, I need more time!) I still keep up on my favorite players like CoreJJ and Alphari.